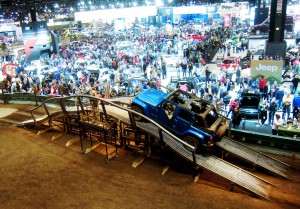 Chrysler returned to prominence again this year at the 2014 Chicago Auto Show. With the most space of any manufacturer (192,00 square feet!), Chrysler brought back the Camp Jeep and multi-brand City Drive (Dodge, Chrysler, Fiat) tracks.

Camp Jeep CAS was the debut of the new Trail Rated Pass course discipline. The TRP demonstrates both articulation and traction as the vehicle traverses the offset, rolling ramps. Along with the TRP, the Chicago course is always a guest and driver favorite, with a mix of organic elements and mechanical properties. The trees, dirt, mulch and boulders add to the outdoor feel – you can trick yourself into feeling like you are wheeling on the Rubicon trail.

On the course, was a mix of 2014 Grand Cherokee, Cherokee Trailhawk, and Wrangler Unlimited vehicles. Compass and Patriot made some trips around the track as well, proving that the whole lineup is more than capable off road.

The Chrysler City Drive returned to Chicago for 2014, showing off the Dodge Charger, Durango and Dart, the Fiat 500 and 500L, and the Chrysler 300, 200 and T&C. GG pro drivers demonstrated an acceleration and braking zone, an ambient sound station, a bumpy road, and a back up camera area.

With the astounding attendance at the Chicago show, we were able to treat tens of thousands of guests and media reps to an experience that is unmatched in this industry.  Kudos to Chrysler for continuing to raise the bar on this event every year.

We Build Events That Build Brands — Are you ready to get started?